Parks + Connections, an Opportunity for Stronger Community Engagement in Tucson

In Tucson, Arizona, a new, 10-year bond package for parks and connections is an opportunity to transform how the city does community engagement.

In 2018, the City of Tucson, Arizona passed Proposition 407: Parks+Connections, a $225 Million bond package to improve parks and the connections to them over the next 10 years (2019 to 2028). For decades, the city lacked sufficient funding for major park upgrades, and in 2018 they had strong support from the mayor to make parks a priority. Additionally, the city had just written a parks master plan. As part of the parks master planning process, the city conducted a comprehensive survey that indicated that biking and walking was the number two issue concerning parks. Forty-seven percent of the respondents cited outdoor walking and biking paths among their top four most important recreational facilities, followed by 39 percent who listed neighborhood/community parks. With that information, parks and connections became the focus of the new bond package. Many of the connection projects included in the bond package were identified from the Bicycle Boulevard Master Plan to connect people to everyday destinations, as well as from a list of pedestrian safety and walkability projects that were originally selected for an earlier county-wide bond measure that didn’t pass. Put into action, that means new sidewalks, safer crossings on major streets, off-street biking and walking paths, shade trees, and traffic calming on residential streets.

Living Streets Alliance (LSA), a local nonprofit, saw these projects as an opportunity to transform the city’s approach to community engagement and include more creative, meaningful opportunities for residents to express their vision for their neighborhood. Traditional community engagement practices, like open-houses, often do more to inform residents of what is happening than actually solicit feedback or ideas. They also often exclude the most disenfranchised residents who may be most affected by changes to their neighborhood.

Originally, LSA intended to work with the city to model a new format of community engagement that would culminate with collaboratively repainting an intersection with residents, however, due to the coronavirus pandemic, LSA focused on reworking the city’s internal processes to engage the community in park access projects instead.

With a grant and technical assistance from the Safe Routes to Parks Activating Communities Program, LSA began a conversation with the parks and recreation department and the transportation department to identify opportunities for improving community engagement for the City’s Proposition 407 Parks + Connections initiative in the short-term and other similar projects in the long-term. To ensure that this conversation was city-wide, LSA hosted a two-part Working Together for Equitable Community Engagement workshop in partnership with Safe Routes Partnership staff. The workshops brought together staff from multiple city departments, including transportation, housing, parks and recreation, the city manager’s office, and consultant teams working on projects funded by Proposition 407. All of these separate agencies are working on different projects but provide insight on the barriers and opportunities for more meaningful engagement with residents’ needs and desires. The workshops, facilitated by Safe Routes Partnership staff, allowed for a candid conversation. Ultimately, these discussions informed LSA’s Safe Routes to Parks Action Plan and fostered commitment in city departments to put the recommendations into action.

To apply what was learned in the workshop, the city and LSA organized a “focus group” bike ride with bike club leaders in the Pueblo Gardens neighborhood in late September of 2020. The city departments and a consulting engineering firm working on a Proposition 407 greenway project near Pueblo Gardens had three possible route options. Project managers from the city and the engineering firm joined the ride to discuss the potential routes with the group and to hear firsthand from the bike club leaders about their community. The majority of the bike club leaders live in the neighborhood and lead young people from the school on weekly bike rides in and around Pueblo Gardens. 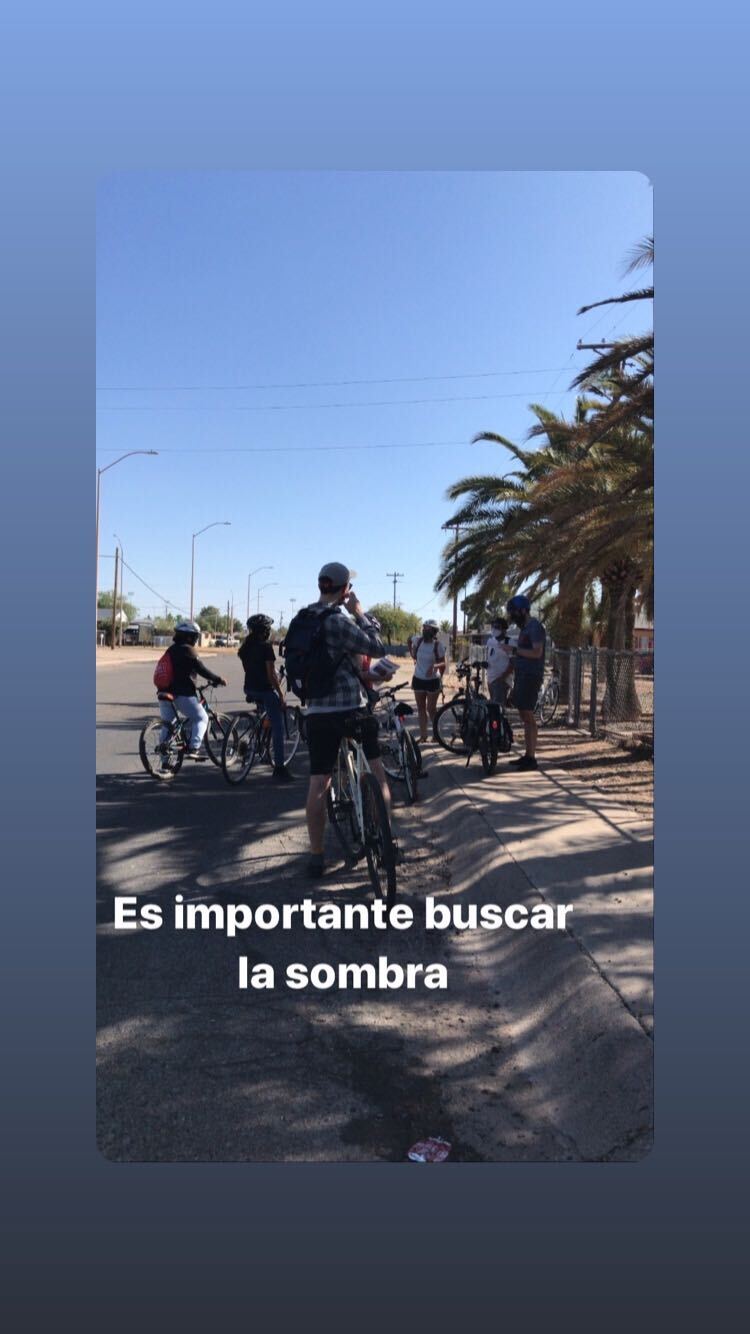 Their perspectives and local knowledge brought important insights to the greenway project such as considerations for better access to neighborhood destinations or personal safety concerns based on the neighbors’ lived experiences as an added layer to engineering-focused traffic safety issues. If the school had been open for in-person classes, this would have been an opportunity to engage the entire bike club, but this smaller version still illustrated the expertise that residents bring to conversations about connectivity because they experience their neighborhood every day. It was important to LSA to model an example of the "nontraditional" community engagement strategies that they are asking the city to incorporate, where the perspectives and lived experiences of community members are incorporated into project decision-making processes. They believe that it is especially vital to hear from individuals who work with young people, who often rely on safe walking and biking routes to access parks. Focus group participants were compensated for their time and contributions as neighborhood experts, which is another best practice that LSA is encouraging the city to explore.

“Working closely with Living Streets Alliance through the Safe Routes to Parks grant was an incredible opportunity to convene multiple thought-provoking conversations with individuals across the City. As the Program Manager for Proposition 407: Parks+Connections Program, it is within my role to shape and guide this program to improve trust and image of the City. There are so many avenues for doing this, but a critical piece is being able to effectively collaborate and communicate with project stakeholders as the program structure allows. I have very little experience with community engagement and I greatly valued the time that we had to work together as Prop 407 delivery team, together as a City, and together as community partners to learn about what we are doing and what we can do better.” — Jasmine Chan, City of Tucson, Program Manager, Tucson Delivers Great Parks and Strong Connections.

While the long-term goal of incorporating resident participation into routine operations in the City of Tucson will take much longer than a single grant period or workshop, this workshop planted the seeds for lasting change. Staff that participated in the workshop now better understand that they need to increase internal capacity to understand what equitable community engagement looks like; recognize the implications of race, culture, and socio-economic status on community engagement; receive, honor, and incorporate community voices and decision-making into project decisions; and ultimately to engage communities as partners throughout project timelines. 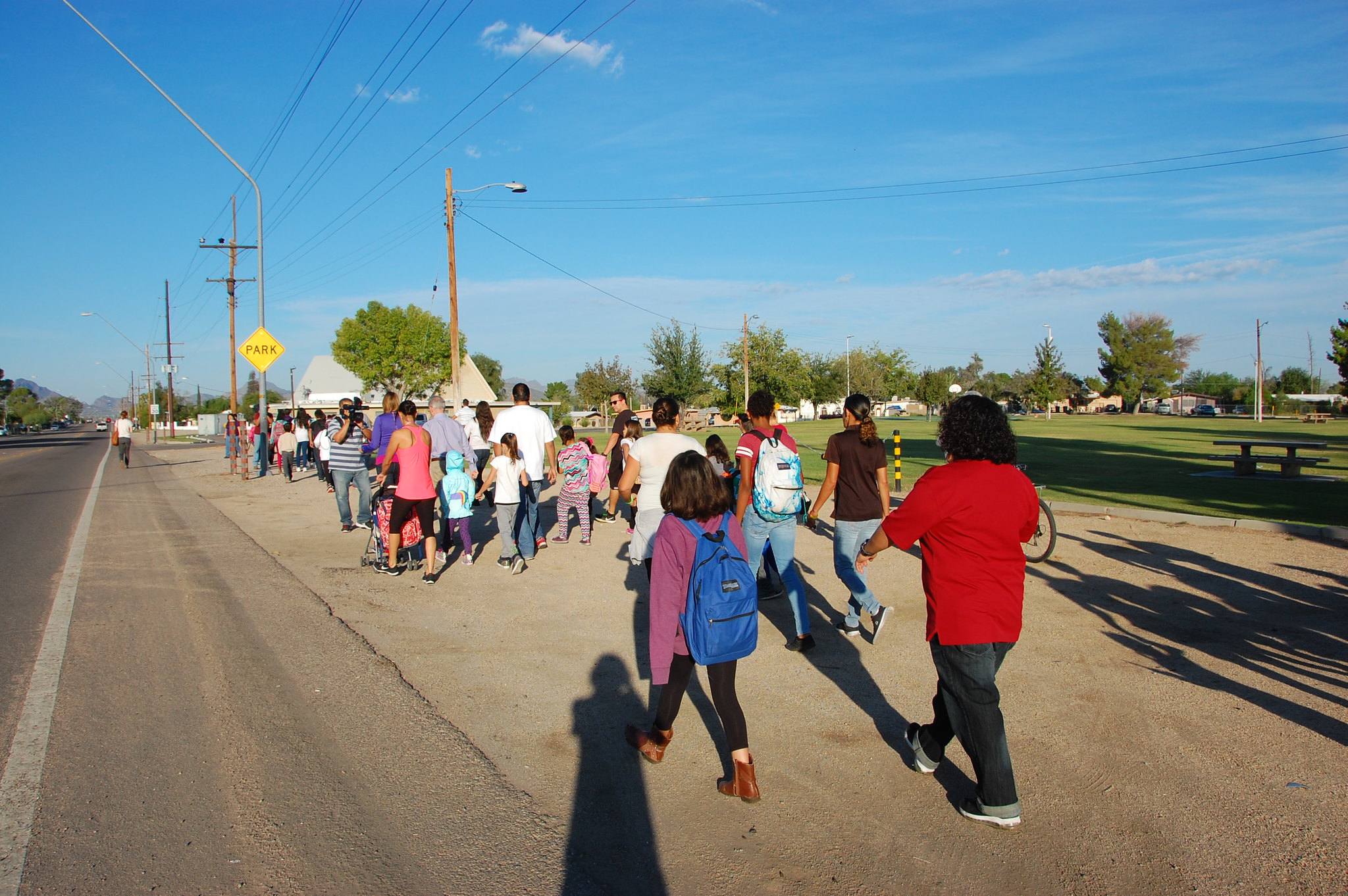 To continue the work and honor their initial promise to the Pueblo Gardens neighborhood K-8 school, LSA earmarked a portion of their remaining grant funding to paint an intersection safety mural during a block painting party with the school and broader community. This event will be organized as soon as safety and health restrictions permit.

Funding from the Safe Routes to Parks Activating Communities Program brought LSA one giant step closer to their goal of connecting Tucson’s parks and recreation department and transportation department to establish more meaningful community engagement practices that will support communities to flourish over time.

"While we weren’t able to come together with the Pueblo Gardens community and do the joyful and uplifting work of transforming the streets with bright colors, this grant gave us the opportunity and the resources to have valuable conversations around community engagement with our partners at the City of Tucson. We collectively have more work to do, but it’s been rewarding to see some changes already taking place in terms of creating more welcoming virtual engagement spaces, paying closer attention to linguistic inclusivity, and sharing back with community members, in addition to greater collaboration between the different Prop 407 implementation partners."  -- Evren Sönmez, Director of Strategic Policy & Practice at LSA